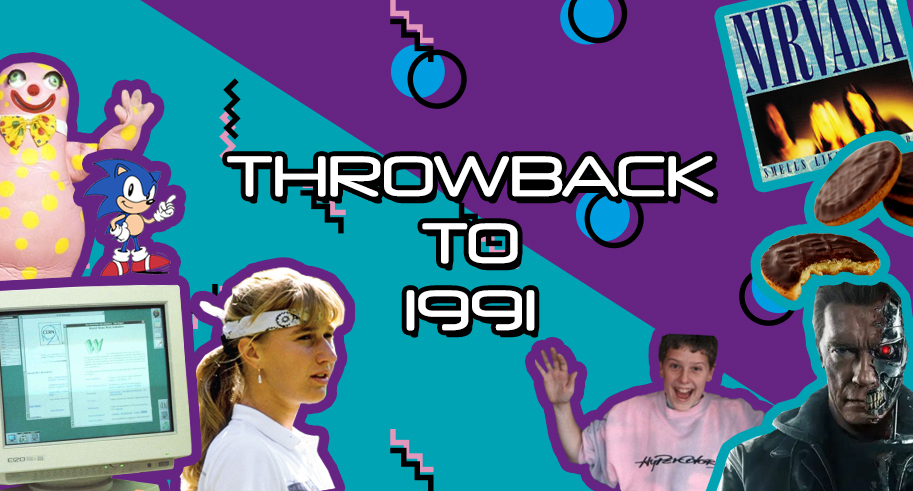 To celebrate our 30th anniversary, we are throwing it back to 30 years ago, a time where a mars bar would have cost you 27p, the Fresh Prince of Bel Air was on TV and Solab was coming together with a business plan in Microsoft Excel 3.0. So, take a trip down memory lane and […]

To celebrate our 30th anniversary, we are throwing it back to 30 years ago, a time where a mars bar would have cost you 27p, the Fresh Prince of Bel Air was on TV and Solab was coming together with a business plan in Microsoft Excel 3.0.

So, take a trip down memory lane and reminiscence at some of the biggest and greatest moments of 1991 (other than the launch of Solab, obviously!) …

A life without Google…

The internet three decades ago certainly was not what we know it to be today! The very first webpage was launched in August of 1991, and now 30 years on there are over 4.2 billion web pages out there on the web.

These movies are now considered ‘classics’…

1991 movies brought home some iconic family favourites such as Disney’s ‘Beauty and the Beast’, ‘The Adam’s Family’ and our favourite gal pal duo of the 90s, ‘Thelma and Louise’. Blockbuster action film “Terminator 2: Judgement Day’ gave us one of the most notorious quotes off all time…“Hasta la vista, baby” and ‘Silence of the Lambs’  became an Oscar sensation after receiving “the big 5” accolades at the 64th Academy Awards.

Grant Mitchell and Sharon Watts tied the knot on the quintessential British show EastEnders and Noel Edmond’s house Party exploded on to our screens on a Saturday evening, introducing us to Mr Blobby… a national treasure.

1991, also marked the first edition of Hogmanay Live, Scotland’s New Year’s Eve celebrations that are broadcast live on the BBC every year. Ringing in the New Year with the firing of Edinburgh Castle’s One O’clock gun and all the other fireworks and celebrations in the capital.

Take it to the Runway

From the original Puffa jacket, James hooded tops, Wallabee Shoes to dressing like you had found the rejects from a car boot sale and decided to wear all the items at the same time, it is safe to say fashion in 1911 was a bit of a faux pas. But the crème de la crème has to be the Global Hypercolor T-Shirts that took the world by storm. The heat from sweat patches, handprints and even breathing on the fabric caused it to change colour… EEEK!

Oh, to hear the sweet sounds of a wind-up radio again…

The release of the Wind-up Radio in 1991 meant nothing could stop you groovin’ and for 16 weeks nothing could stop Bryan Adam’s from belting out his single (Everything I do) I do it for you! The ‘hit’ sat at number 1 for a whopping 4 months until it was finally knocked off by U2.

Grunge was all the age in the 90s and at the forefront was Nirvana, who released their second album ‘Nevermind’ in late 1991 – with its Iconic album cover and of course their hit single ‘Smells Like Teen Spirit’, it is often branded the anthem of Gen X!

Not a good year for British tennis…

Time to check the attic…

1991 brought the creation of Sega’s speedy blue friend… Sonic the Hedgehog! With his extremely 90’s look, heavy synth music and bold colourful backgrounds, Sonic was one of the best-selling games of all time and an instant classic.

Inline Skates also became the hottest ‘thing’ of the moment, so if you liked to play outside rather than in front of the TV you probably had a pair of these… along with lots of scrapes and bruises.

Settle it in Court

Will this ever really be settled…

In 1991, due to a high-profile court case, the British Government was forced to define the difference between a cake a biscuit… publishing an official statement that ‘a cake is defined by its propensity to harden over time, whereas a biscuit has a propensity to soften.’

Although this was settled at court, it certainly hasn’t stopped us debating the age-old question… is a Jaffa Cake a cake or a biscuit?

We hope you enjoyed that trip down memory lane…. here’s to the next 30!